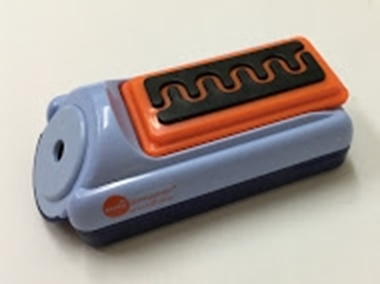 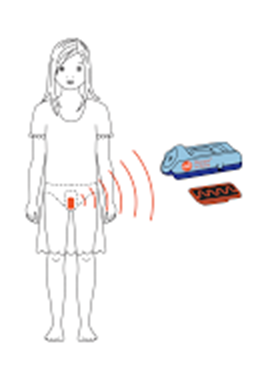 The alarm consists of a moisture-sensitive sensor plate that is placed in the child's underwear, preferably with a panty liner / mini bandage, and a receiver in the form of an alarm box. When the sensor plate senses enough moisture, it sends a wireless signal to the alarm box which alarms and wakes the child.

Sensor plate that is placed in the child's underwear, preferably with a panty liner / mini bandage.

• Reliable sensor plate that detects moisture from after the first drops but is protected in the panty liner / mini bandage so as not to react to less moisture from body heat or sweating.

• The receiver is reached with a range of up to 25 meters.

• No cord under pyjamas / nightgown and no alarm box on the shoulder.

• Can be used for all types of underwear.

• Powered by batteries. The sensor plate battery is included and cannot be replaced. Lasts during normal treatment for up to 12 months. Alarm box 2x1.5-volt AA alkaline batteries or equivalent.

• Additional receivers (alarm box) can be purchased extra to be placed in the parents' room.

• Can also be used for geriatric incontinence problems.

HOW THE ALARM IS USED

• At bedtime, the sensor plate is attached to the child's underpants / panties via a panty liner / mini bandage alt. a pocket directly in the panties.

• The receiver (alarm box) is placed in the child's room up to 25 meters from the child's bed.

• The family chooses where in the room the alarm is placed. It is important that the child hears the alarm so he can learn the behavior to go up to the signal himself and eventually to a full bladder. The alarm should be placed far enough from the bed so that the child cannot stretch and turn it off without getting out of bed.

• An additional receiver (alarm box) can be purchased extra to be placed in the parents' room (not included in the standard package).

• When the child urinates in bed, the sensor plate sends a signal to the receiver (alarm box) which alarms and wakes the child.

• The alarm box signal continues until the "reset" button is pressed. This is to ensure that the child and parents wake up to the sound and that the child gets out of bed to turn off the alarm.

• Volume and signal are set so that the child can wake up.

• Clean the sensor plate with soap and water or mild detergent after use.

• Note! Never immerse the alarm unit or sensor plate in water. When cleaning, use a damp cloth 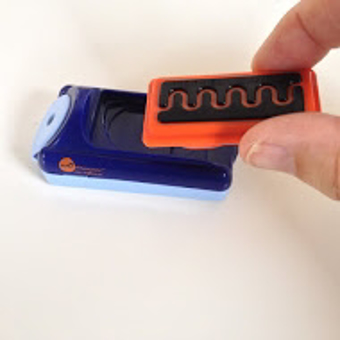